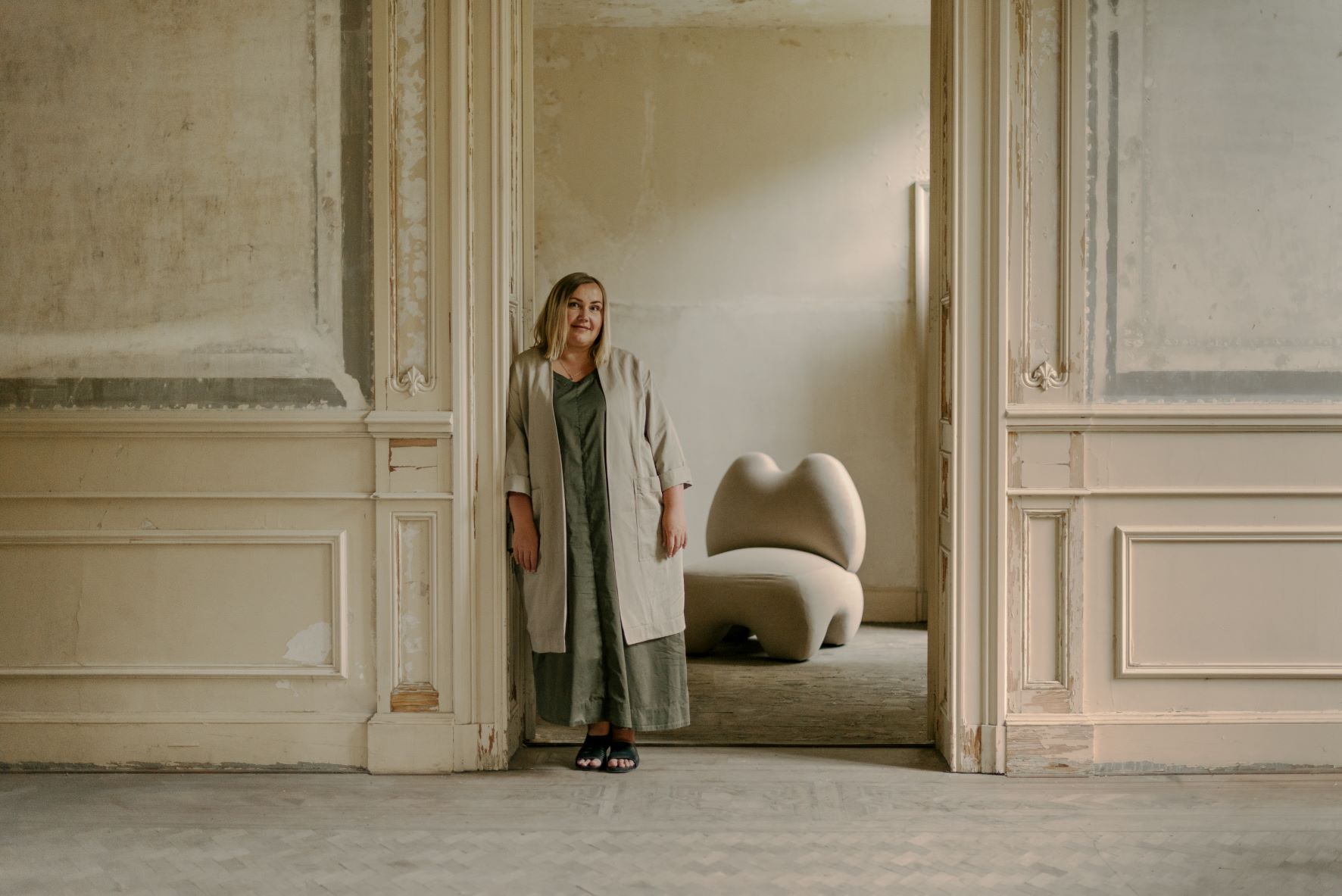 “Design can be more than feast for the eye”: this statement is proven by Ukrainian architect-designer Victoria Yakusha. Since 2014, she has been paying tribute to her country's ancient form of language with her collection FAINA. Yakusha is simultaneously fighting against the Russian annihilation of the Ukraine and the cultural heritage of her homeland. As of late, you can admire her work in her brand new showroom in Antwerp. "The cultural heritage forms the basis of a country. “Only with this basis there’s a way to build a future.”

You founded FAINA in 2014, not coincidentally an eventful year for your country. Was that coincidental or deliberate?

It was the year of the Revolution of Dignity, the ongoing bloody events of the Maidan Revolution. Ukrainians flocked to the streets to protest then-President Viktor Yanukovych. Despite a pro-European parliament, he would not sign the free trade agreements with Europe and started to lean closer to Russia again. In the end, Yanukovych was deposed. Besides relief, I had the uneasy feeling that no one - neither politicians nor international powers - really cared about the Ukraine except for the Ukrainian citizens themselves. That touched my heart. In response to this feeling I decided to show our culture, sincerity and honesty to the world.

2014 is also the year Russia invaded. How did you experience that?

Indeed. That's when Russia annexed Crimea and took away many homes of Ukrainian citizens in the Donbas. It was the year Russia poured terror on our peaceful country. One of my employees had to flee Donetsk then. She left her apartment, her business and all her possessions behind and moved to Kiev. All she had left were the ideas in her head. In 2014, a lot of citizens lost their homes. When I read about the many atrocities committed by Russia, I feel an unbearable pain. But our sense of unity remains indestructible. We will rebuild our country and make it even more beautiful that it already was.

Is FAINA a way to preserve the Ukrainian legacy because you fear it would be lost?

If you read about Ukrainian history, you will notice that there have been a lot of attempts to erase our culture. The former Soviet regime banished Ukrainian traditions. Intelligentsia who wanted to protect our culture and identity were murdered. Often people were already targeted simply for calling themselves Ukrainians. As history is repeating itself, I feel an even greater responsibility to pass on our legacy. Design is my platform to do that. Moreover, I am very proud of my Ukrainian background. I find strength in it. And unconsciously it is contained in every project.

Ukrainian design is quite unknown in the West. What are its characteristics?

Ukrainian design contains a certain esprit, the feeling of free nature, of openness. Even a kind of childlike naivety is present. There is a strong connection with nature and our ancestors. This makes the language of the objects feel primitive. But primitive implies primary, referring to the essence of things.

First of all, old symbols and objects from my childhood. The Kumanec vase, for example, is a reinterpretation of a ceramic carafe that Ukrainian women carried on their arms to pour out drinks. I go back even further in time. Our woolen tapestries, for example, depict symbols of Trypillia, a civilization that inhabited our land thousands of years before Christ.

In every design piece, I detect a deep connection to nature. Am I interpreting that correctly?

In all my designs, you feel a constant reverie about the connection between man and nature. This manifests itself in the capacity of organic forms, living materials and natural colours. For example, our Plyn vases are inspired by the fluidity and eternal change of water. Our ancestors lived with a deep respect for the natural environment. They attributed a soul to everything, from tree to river, and considered themselves inseparable from nature. I try to convey this animistic belief in my designs. By connecting with nature, we connect back to ourselves.

What traditional techniques do you use?

Besides traditional glass and weaving techniques, the most important one is that of Valkuvannya. This technique was used in traditional hut construction in the early twentieth century. Clay mixed with hay was applied in several layers against a construction of woven walls. Subsequently the walls were finished with a layer of limestone. Based on this, I came up with the Ztista technique. Instead of hay, we mix sawdust and paper into clay. Recycling is important to me. For example, the metal structures of the objects on which the layers of clay are smeared are made of recycled steel.

Is everything handmade in Ukraine?

Yes, it is. This aspect is part of our DNA. In the Ukraine, crafts unfortunately know a silent and slow death. For example, our craftsman who works with burnt wood is eighty years old. His skill will be lost if he stops working with it. We are trying to highlight those kinds of crafts all over the world in the hope that they will survive. We do that by connecting the old crafts with contemporary design that aesthetically represents the optimum balance between old and modern. Hence, I translate traditional motifs and symbols into the simplest, most essential form possible. In this way, we create minimalist, austere objects that manage to attract a new generation, in the hope that that generation will recognize the beauty of our heritage and try to preserve it.

Since 2019, your office has been in Brussels and you recently opened a beautiful showroom in Antwerp. What is your connection with Belgium?

I moved when I was pregnant with my fourth child. I was looking for a European clinic to give birth. I chose Brussels. Belgium offered me some kind of peace after having lived in Kiev. Over there, we are used to a much higher rhythm of life. It is assumed that you respond quickly. People are therefore much more flexible, but also more direct. In Belgium, life feels calmer, more measured and predictable. This is also reflected in the design. Belgian design is more restrained, and that's not a judgment. It can be equally evocative and sensual.

How do we recognize the FAINA signature?

Especially for FAINA's new Antwerp gallery, I designed the Pechyvo cabinets with the perforated, wooden doors. The holes are inspired by the small round windows of traditional clay houses. The windows are uneven in shape. I wanted to convey that in the cabinet. Meanwhile, we have integrated the perforations into several other designs. They have become a characteristic element of FAINA.

How do you deal with the war from here?

I live with my family in Brussels, but try to support the Ukraine. Just last month I dropped off humanitarian aids in my native country. On May 6, I will open the exhibition 'On the Strings of Bandura' in my Antwerp gallery. The bandura is a typical Ukrainian musical instrument, somewhere between a lute and a harp. In the past the bandura was often played by blind troubadours. The Soviet regime arrested those troubadours because they would be spreading the Ukrainian identity. I translated the shape of the instrument into some vases. Part of the proceeds will go to Ukrainian cultural institutions that will have to be rebuilt after the war.

Has FAINA become a statement against the war?

Everything we do, we also did before the war started this year. But now our cultural expression feels much more radical. Our nation is being wiped off the map. Once again, FAINA is a vehicle for being heard. That is why we will be promoting Ukrainian design at Design Miami/Basel this year.

As seen/read in ABSoluut magazine
Find our other magazine cases here.